Evolution of a Lizard Room Part I: Introduction 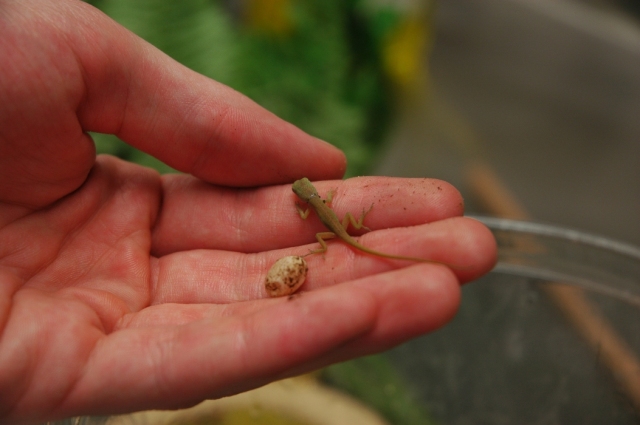 Anolis carolinensis hatchling and the egg from which it hatched

Breeding anoles to look at inheritance of dewlap color has been a major component of my research. It has also, however, been a major frustration. Every step of the process, from keeping the anoles happy enough to reproduce, to finding eggs, to successfully raising healthy hatchlings to adults has required much tweaking over the years. It has certainly been a work-in-progress and I am happy to say that with both minor and major changes over the years, our lab has transformed into a baby-making factory! This post is the first of a series discussing aspects of anole care, in the hope of both sharing our ideas with people in the anole community, as well as to start a discussion on other techniques people are using to breed/care for anoles.

While we are now focused on breeding Anolis distichus, we first started off breeding field-caught Anolis carolinensis in late 2007. Anoles were kept in mating groups of 1 male and 3 females in large KritterKeepers with Astroturf on the bottom and a pair of dowels to serve as perches. Each cage had a small deli cup filled with moist soil for anoles to lay their eggs. All eggs found were also incubated in soil-filled deli cups. To keep the humidity high in the cage, we sprayed the sides of the cages twice a day with water using a fertilizer spray pump.

With this design, we were not finding many eggs and the cages were still not retaining humidity, despite twice-daily mistings. We experimented with plastic sheets over the tops of cages (see photo below) but, as this may have affected the light the anoles were getting, and was also a pain to move when misting the cages, we have since removed the Astroturf and the plastic sheets, and now cover the bottoms of cages with organic potting mix. As the soil retains some moisture from mistings, the humidity in the cages stays over 40%.

Breeding cages with plastic sheets on top to retain humidity, circa 2008

New hatchlings used to be individually housed in large deli cups with screen-topped lids. As hatchlings are at such a vulnerable stage and are prone to desiccation, we thought that large deli cups would retain humidity better than Kritter Keepers. We, however, experienced a high mortality rate and have therefore started housing hatchlings in Kritter Keepers/large acrylic cages (more detail in a future post!), with up to 6 hatchlings in a cage. We are unsure what exactly was the cause of low hatchling survival in deli cups (perhaps air flow?), but survival has since been much higher.

We have made many more changes to various aspects of our anole breeding program, so stay tuned to future posts!

PhD student at the University of Rochester, combining ecological and molecular genetic data to study dewlap color in anoles.
View all posts by julienneng →
This entry was posted in Research Methods. Bookmark the permalink.

6 Responses to Evolution of a Lizard Room Part I: Introduction