Posted on December 7, 2011 by marthamunoz 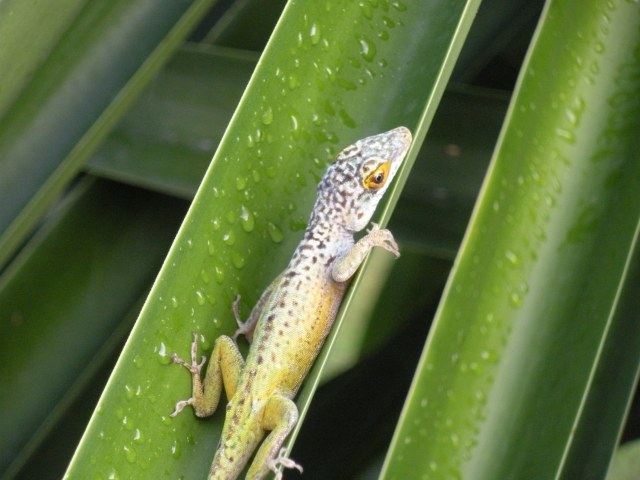 Early morning sighting of a female Anolis leachii on a leaf covered in raindrops.

Sometimes, they say, it’s about the journey, not the destination. This makes me think of exciting layovers I’ve had in Anolis country. At any place where the layover is long enough to permit stepping outside of the airport, I like to pop out and see what kind of anoles I can find lurking around the terminals. On a few occasions, travel requires an overnight stay in an exciting place. One of the benefits of working in remote Lesser Antillean islands is that infrequent (and unpredictable) airline schedules typically mean spending a night or two in tiny islands to and from the actual destination. For years I’ve been working in Montserrat, a small island with an active volcano, where I try to follow the flighty bugger Anolis lividus as close to the volcano as I can get. On our way home from Montserrat, we usually spend a night in Antigua, where the charming giant, Anolis leachii can be found.

View of a raincloud and rainbow as we descended into Antigua in January 2009.

Like most anoles from the Lesser Antilles, this species is abundant. However, few species from the Lesser Antilles are as large as A. leachii. It is a member of the bimaculatus clade of large anoles from the Northern Lesser Antilles. According to Scwhartz and Henderson (1991), it can reach a snout-vent length of 123 mm. For anyone who works with crown-giants, this may not seem so large, but for an aficionado of the Lesser Antillean anoles, Anolis leachii is a relative behemoth! Its body ranges from yellow to blue and green, and it’s covered in a purplish vermiculation. The large eyering ranges from a sulfurous yellow to a deep orange. Hands down, this is one of the world’s most beautiful anoles. Imagine my excitement when I got to spend a night chasing these lizards through the wilds of Antigua Village, a cushy beach resort teeming with Anolis leachii and the smaller congener, A. wattsii. Here I offer some photos of this dazzling species, and a bit of its taxonomic history. 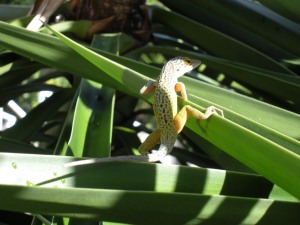 Some of the earliest naturalists to explore remote and exotic islands were not very specific about which islands their specimens came from. At the time, this made sense. Naturalists were only beginning to discover geographic variation across islands. Even Charles Darwin was guilty of this. We know that he was a tad bit careless when labeling his Galapagos finches. Darwin was much more interested in tortoise shells and marine iguanas at the time, which led to his observations on animal variation on islands, so perhaps we can forgive him. When Dumeril and Bibron (1837) described Anolis leachii, the type locality was described as “Antilles,” which is less descriptive than one might hope. Thomas Barbour later coined two species, A. antiguae (1915) from Antigua and A. barbudensis (1923) from the neighboring island of Barbuda.

Adult male Anolis leachi perching on a trunk in Antigua.

In an excellent 1972 monograph, which still remains the best compendium for Lesser Antillean anoles, James (Skip) Lazell made this anole a subspecies of Anolis bimaculatus. This classification held for almost three decades, until a phylogeny was published by Chris Schneider and colleagues (2001) in the Journal of Herpetology demonstrated that A. bimaculatus is actually more closely related to A. gingivinus (Cope 1864), found on the nearby island of Anguilla, than either is to A. leachi. Moreover, Anolis leachii actually proved to be a problematic taxon in Schneider’s study. Some analyses (combined allozyme and mtDNA; unordered parsimony) placed it outside of the marmoratus clade, a group of medium-sized anoles (with the exception of A. ferreus) from Guadeloupe, Dominica, Saba, and Montserrat. The maximum likelihood analysis finds Anolis leachii to be sister to the A. bimaculatus – A. gingivinus clade, which makes sense based on phenotypic characteristics and body size. A consideration of body size in the Northern Lesser Antilles will be the subject of a future post. 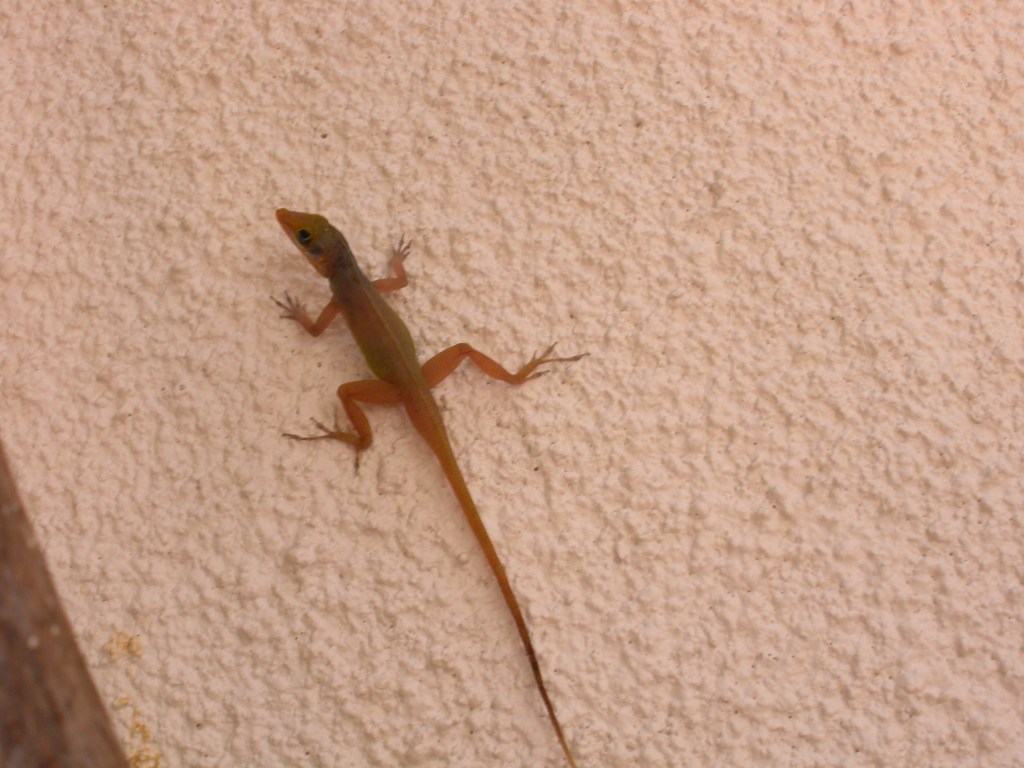 The pipsqueak Anolis wattsii, which packs a meaner bite than its size belies. 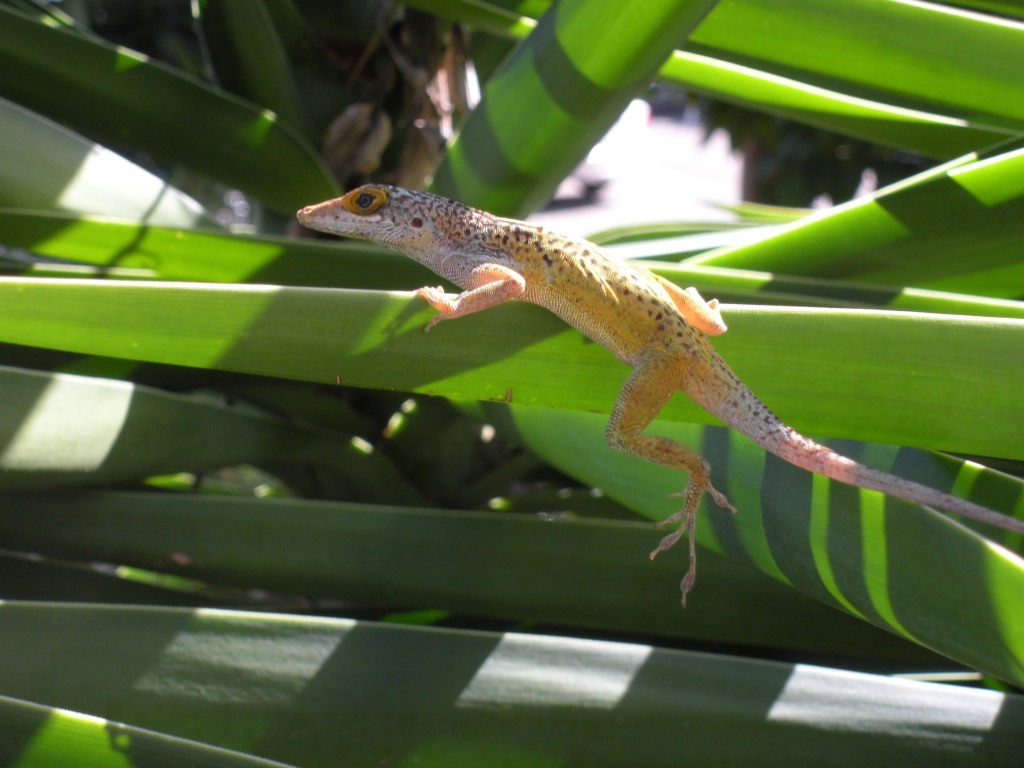 Anolis leachii female on a leaf. 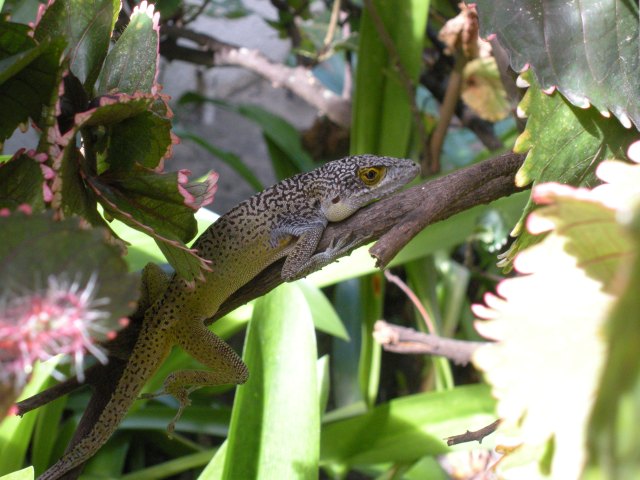 Martha is working on her PhD on the thermal ecology and evolution of anoles in the Losos Lab at Harvard University.
View all posts by marthamunoz →
This entry was posted in Classics from the Literature, Natural History Observations and tagged Antigua, bimaculatus, leachi, Lesser Antilles, lizard. Bookmark the permalink.