Not All Embryos are Created Equal

The pages of Anole Annals were recently graced with beautiful photos of Anolis embryos (here), their allure attracting attention from far and wide (here). Unfortunately, development doesn’t always go according to plan. While slight perturbations to development can create fodder for natural selection, more extreme phenotypic mutations can create not-so-hopeful monsters (a play on R. Goldschmidt’s theory of hopeful monsters which predicts that relatively large homeotic mutations can contribute to evolutionary saltations). Several years ago I dissected this embryo of A. sagrei. Count the body parts.What do you see?

This is likely one of the most extreme mutant Anolis embryos I have collected. I regularly 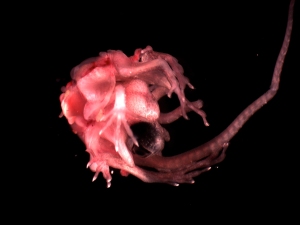 find dead embryos that appear normal morphologically and died for unknown causes. But this is the other extreme. This embryo clearly possesses a well-developed, seemingly normal head, limbs, and tail. It is even beginning to develop scales on the limbs and body. Without dissection I cannot be precisely sure about the nature of this mutation, but one can readily discern that there is no well-defined body axis, the head, tail, limbs all emerge from a nondescript central mass of tissue. Perhaps 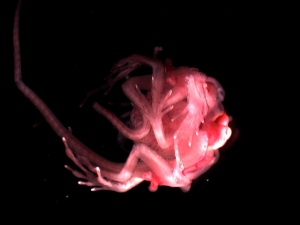 more interesting  in this light, there also appears to be an axis duplication. Eight limbs, two tails, and two sets of hemipenes are visible, but only one head (note, only one eye is visible but both are present). Can’t see everything? Check out the labeled photos below.

Finding specimens like this reminds me of an embryo’s resilience to persist through to the late stages of development even in the face of serious abnormalities. But how often do these seemingly severe, most likely lethal morphological mutations arise in natural populations and through what stages do they survive? My observations from 10-15 anole species have found that less severe mutations are somewhat common in the limbs, most often affecting the most distal elements. Rich Glor recently commented that skeletal abnormalities are occasionally observed in his anole hatchlings and non-lethal skeletal abnormalities along the vertebral column are also quite common (here and here). As the number of biologists studying anole embryos increases it will be interesting to catalog the number and extent of developmental mutations occurring in this genus to gain deeper understanding of the developmental bases of morphological variation. Observations such as these can also potentially inform us about the number of lethal mutations that a population harbors. Have others observed mutations in other organ systems? If so, how severe were they? Please share.

Here are the same photos as above labeling the duplicated anatomical elements. 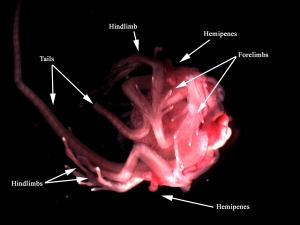 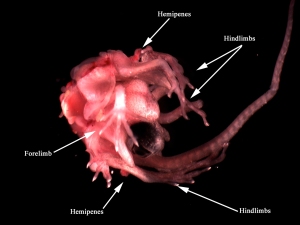 This entry was posted in Natural History Observations, Notes from the Field. Bookmark the permalink.

2 Responses to Not All Embryos are Created Equal