Anole Research at Animal Behavior Meeting in Summer of 2011

Thom’s recent post on the upcoming SICB meeting reminded me that I was yet to share the anole research I learned about at the Animal Behavior Meeting this past summer in Bloomington, Indiana. There were just a handful of presentations on herp research during the meeting, and I was excited to see that there were others presenting work on anoles: 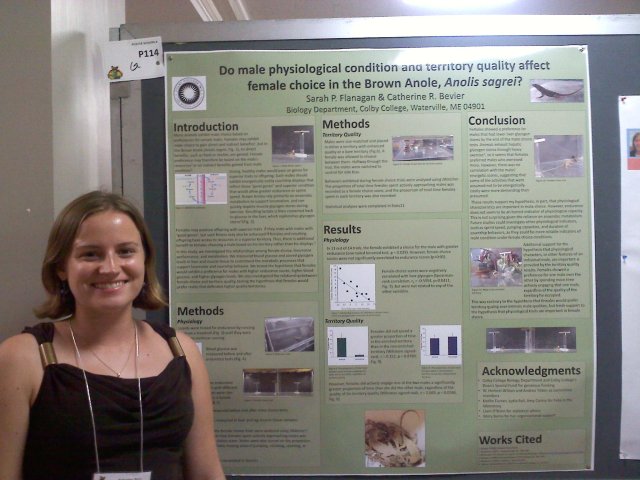 Sarah Flanagan presented work from her Honors thesis with Catherine Bevier whereby she used mate choice experiments to test whether female Anolis sagrei prefer males with greater physiological capacities and/or higher quality territories. Sarah’s study showed that females preferred males with depleted liver glycogen (glycogen levels were measured in leg muscle and liver samples after mate choice trials). Females, however, did not show a preference for males in a territory filled with plants over males in bare territories. 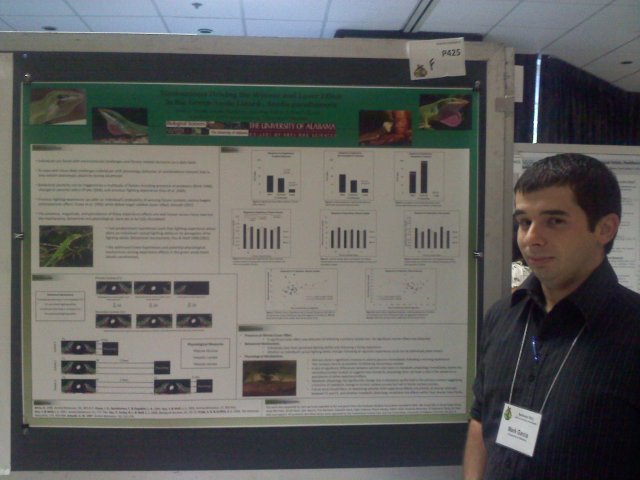 Mark Garcia from the Earley lab used A. carolinensis to ask whether fighting experience can change the probability of winning future contests. While he did not find a significant winner effect, Mark’s study found a significant change when an anole experienced losing a fight.

Michawn Shelton did an REU with Matt Lovern over the summer. Michawn compared the immune response of lab-raised and field-caught A. sagrei using an in vitro bacterial-killing assay. She found that the immune system of lab-raised males responded better to bacteria than field-caught individuals. One explanation she had for this result is that field animals have more energetic demands for survival and growth compared to those raised in a stable lab environment.

PhD student at the University of Rochester, combining ecological and molecular genetic data to study dewlap color in anoles.
View all posts by julienneng →
This entry was posted in New Research. Bookmark the permalink.