Notes from a Common Garden Experiment 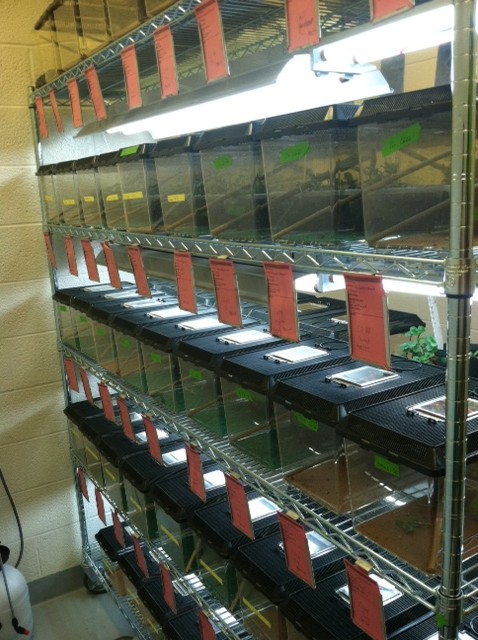 The cages in which females are individually housed during the common garden experiment. Each cage has a bamboo perch and a plant in potting soil where the lizard can lay her eggs.

We are in the midst of a common garden experiment in which we’ve taken gravid Anolis carolinensis females from morphologically differentiated populations in the wild and returned with them to the lab where we are collecting eggs to incubate and hatch. We’d eventually like to know whether the offspring of these females maintain the differentiation observed in the wild under common growth conditions. If yes, this is good evidence that the differences we’ve observed are a result of genetic changes among populations, rather than phenotypic plasticity during development and growth. A few notes from this ongoing experiment follow.

We brought back 69 females on August 1 2011, and we’ve been checking for eggs 2 to 3 times per week. As of September 6, we had collected 61 eggs. Most females have produced one egg, a few two, and the rest none. Egg laying rates were higher earlier in the experiment (maxing out at 12 eggs per search during the second week of August) but we’re still collecting 3 to 4 eggs per search even now, a month later.

An egg. The female buried it beneath the potted plant, which was removed during the search. The egg is approximately one centimeter long. Females bury their eggs in the dirt, which helps prevent egg desiccation.

Generally, anoles have a distinct reproductive season. For A. carolinensis, the reproductive season wraps up in late summer / early fall. Accordingly, we’ve found a dozen or so unfertilized eggs laid the cage carpet (rather than buried in the soil), which is normal for females approaching the end of their reproductive season. These eggs are small, yellow, and often don’t have a discernible shell. Occasionally, however, we find an egg laid on the cage carpet that looks like a normal, fertilized, fully-shelled egg. By the time we discover these eggs, they are often desiccated beyond repair.

A desiccated egg found on the cage carpet.

As laying a healthy egg outside of the soil seems like a strange action for a female to take, my question for the anole world is: “Are these eggs actually fertilized?” Have any of you anole breeders out there rescued carpet-laid eggs prior to desiccation and successfully hatched lizards from them?
Presently, all the eggs are in the incubator. Incubation times last from 4-5 weeks depending on the species, so we are expecting our first hatchlings very soon!

Eggs in individual petrie dishes on an incubator rack.

Yoel studies evolutionary ecology of Anolis lizards. He is a graduate student at Harvard University, in the Department of Organismic and Evolutionary Biology.
View all posts by Yoel Stuart →
This entry was posted in New Research, Research Methods. Bookmark the permalink.

9 Responses to Notes from a Common Garden Experiment