What Traits Make an Anole Likely to Be Successfully Introduced? 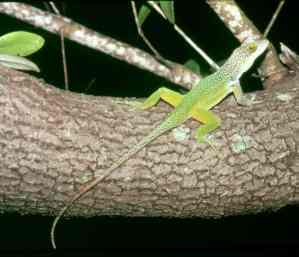 Anolis leachi, one of many Lesser Antillean anoles that have been successfully introduced to areas where they don't occur naturally.

In a companion paper to Poe et al. (Evolution, 2011), Latella et al. examine a variety of attributes of the 19 species of anoles that have been successfully introduced to new areas and compare them to a large number of never naturalized anoles.  Successful invaders differ in many ways from those who’ve never taken the leap or failed trying, including being larger, having larger scales on the snout, being more sexually dimorphic, occurring at lower elevations, occurring in the Lesser Antilles or near a major port and, among Greater Antillean species, having a large geographic range size. Multivariate analysis considering all these variables, however, indicates that the best predictors are a combination of body size, geographic range, and place of occurrence. This multivariate model not only accounts for which species have become established, but can make predictions about which species may be next. High on the list: the large Lesser Antillean A. bimaculatus and A. griseus and the widespread Hispaniolan grass anole, A. semilineatus. The only other highly likely, non-Lesser Antillean invader among the top nine was, surprisingly to my mind, the Jamaican twig anole, A. valencienni, which, on esthetic grounds, would also be highly ranked.

In looking at the list of introduced species, two not very brilliant observations came to mind. First, many introduced species are from the Lesser Antilles, but they’ve also been introduced to other Lesser Antillean islands. Is that due to geographic proximity and high rates of inter-Lesser Antillean island traffic and commerce, or is it because the Lesser Antilles never have more than two native species? Along these lines, second, most anole introductions are to areas that are depauperate in anoles, whereas very few have occurred in richer areas. This, of course, accords with classic  competition theory, but there are other explanations.

Author and Professor at Harvard University
View all posts by Jonathan Losos →
This entry was posted in Introduced Anoles. Bookmark the permalink.