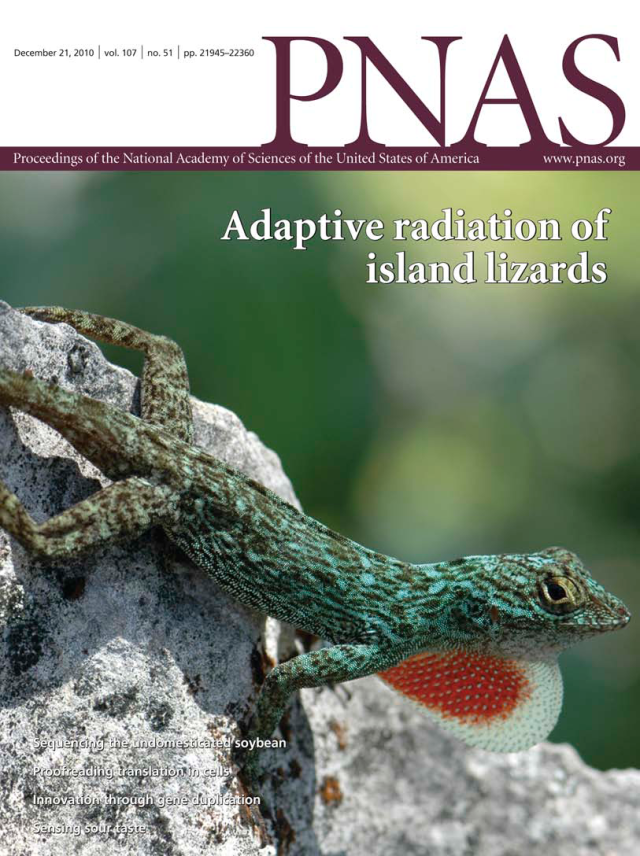 Anolis takes its rightful place on the cover of PNAS. Photo of A. distichus vinosus by R. Glor.

Larger islands have more species.  Why?  MacArthur and Wilson’s theory explains island species richness as an equilibrium between the input of new species (a function of island isolation) and extinction (inversely related to island area).  Although certainly one of the most influential ideas in biology in the 20th century, the theory had its limitations, most specifically, that it relied solely on ecological phenomena—colonization and extinction—to explain species richness.  Yet, that can’t be the whole story, because islands are renowned for their evolutionary exuberance—witness the adaptive flowering of lemurs on Madagascar, finches in the Galápagos, honeycreepers on Hawaii and so on.  MacArthur and Wilson were, of course, well aware of the evolutionary component of island diversity and discussed the need to incorporate evolutionary issues into their theory at the end of their monograph.

As in so many other areas, Caribbean anoles are a perfect case in point.  Among the four islands of the Greater Antilles, a strong species-area relationship exists, with relatively few (7-10) species on the smaller islands of Jamaica and Puerto Rico, but 64 on the largest island, Cuba. Looking across the Greater Antilles, only a single species occurs on more than one island (A. sagrei on Cuba and Jamaica, and it is only a very recent—possibly human-assisted—arrival on the latter island).  Obviously, colonization-extinction dynamics involving a common source pool of species is not the explanation for patterns of species richness.  Indeed, when geographic distribution is mapped onto anole phylogeny, large clades endemic to each island are discovered.  Clearly, most species occurrences in the Greater Antilles result not from colonization from elsewhere, but from in situ speciation.

Ten years ago, Dolph Schluter and I modeled rates of speciation across anole phylogeny and concluded that the species-area relationship for Greater Antillean anoles resulted from a correlation between island area and rate of species diversification—rates of speciation were inferred to be greater on larger islands, producing greater species richness.  Although establishing that patterns of species richness are primarily the result of evolutionary processes, the results of this paper implied that despite tens of millions of years of diversification, anole species richness on these islands is still increasing.  Put another way, come back in a few million years, and Cuba might have far more than its current allotment of anole species.  Although certainly a welcome scenario given the wondrous multiplicity of anoles already in existence, one might ask whether such a conclusion is reasonable.

Recent years have seen an explosion of studies estimating rates of evolutionary diversification from phylogenies.  In a backlash of sorts, Dan Rabosky and others have pointed out an implicit assumption of this approach is that species diversification continues unabated forever, a possibility that we know from the fossil record to be incorrect.  Instead, these workers have suggested that a carrying capacity of sorts exists, such that as species diversity increases, either speciation decreases or extinction increases, or both, leading to a leveling off of species richness.  Such a leveling-off, the evolutionary equilibrial analogue to MacArthur and Wilson’s theory, accords with the fossil record in several ways, both in terms of the explosive diversification of clades early in their history, followed by a slowdown in species diversification, and the apparent plateau in global species richness documented by Sepkoski and others.

Rabosky and Glor have applied this reasoning to understand patterns of species diversification in Greater Antillean anoles.  Using state-of-the-art statistical methods, they tested several hypotheses to account for patterns of species richness across islands and through phylogeny.  Their models resoundingly reject the constant rates model of diversification of Losos and Schluter, showing instead that rates of diversification have declined through time.  Moreover, a common rate of decrease across islands is rejected in favor of island-specific models, and among those, the model assuming a common initial rate of diversification, but different rates of decline, is favored over one in which both initial rate and decrease in that rate vary among islands.  In the preferred model, the rate of decline in diversification is inversely related to island area; that is, rates of decline are greatest on the smallest islands, and only Cuba is inferred to still be increasing in species richness, the other three islands having attained their equilibrial diversities.

Decline in the rate of diversification through time is the common pattern expected of adaptive radiation.  As niches fill, less opportunity exists for new species to arise.  But why should the rate of decrease in diversification be greater on smaller islands?  Two factors seem to be involved.  First, the number of anole species that can coexist in a local community is a function of island area.  On Jamaica, only six species are ever found together, whereas in Cuba, the number is eleven, or even more.  Why this should be is unclear—one possibility is that it results from limited opportunities for speciation on smaller islands.  Which brings us to the second issue—geographic space for speciation.  Larger islands have more species because they have more locally isolated, small-range species.  On Jamaica and Puerto Rico, most species occur island-wide, but this is not so on the larger islands.  For example, in the Anolis alutaceus group in Cuba, several species are widespread, but most have very small, limited ranges, many centered on different mountains in eastern Cuba.  Presumably, the greater opportunity for geographic isolation presents more scope for speciation, and thus slows the decrease in species diversification through time on larger islands.

One last question concerns how our changing conception of anole species diversity may alter these conclusions.  Although the discovery of entirely new species in recent years has been limited to Cuba (but Hispaniola may still harbor a surprise or two), we may be on the cusp of a wave of taxonomic splitting.  Over the last decade, it has become clear that many widespread Greater Antillean anole species are highly subdivided genetically, so much so that workers on other taxa almost surely would have split them into many parapatrically distributed species.  The recent paper by Glor’s group on A. distichus concluded that this species should be divided into a half dozen or species (and this doesn’t include populations in Haiti or the Bahamas), and it is certainly possible that further work on other widespread Greater Antillean Rabosky and Glor coveranoles may come to the same conclusion.  The result may be that most widespread species are divided in 4-8 species, not only greatly increasing the species richness on all islands, but also creating many relatively young species.  Whether such an increase in perceived recent diversification would counter the decline in rates of species diversification reported by Rabosky and Glor remains to be seen.

Author and Professor at Harvard University
View all posts by Jonathan Losos →
This entry was posted in New Research. Bookmark the permalink.

4 Responses to Why Larger Islands Have More Anole Species